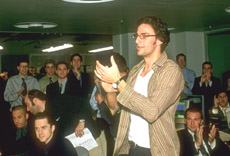 A New York City native, Younger attended the City University of New York where he studied political science. To put himself through school, Younger worked as a stand-up comic appearing at venues around New York. He left his stand-up career behind when he won a coveted internship as a legislative aide to New York State Assemblyman Alan Hevesi. He worked on Hevesi´s campaign to become Comptroller of New York City and later served as a senior policy analyst in the Comptroller´s office. Following that, Younger ran the successful State Assembly campaign for Melinda Katz, becoming the youngest campaign manager in New York City.

Younger then switched from politics to filmmaking, making his entry as a grip on feature films and music videos. He went on to become a corporate video cameraman. Younger also wrote and directed two short films: L & M, which was shown at the Taos Talking Pictures Festival, and produced Maestro.

Younger was looking for a job to support himself while making the transition into writing and directing when he was recruited as a Boiler Room trainee. Amazed by this hidden world of instant millionaires, he spent a year researching underground telemarketing and brokerages while writing Boiler Room, his first screenplay.