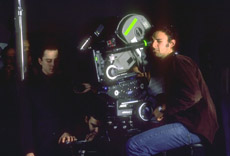 From the beginning, Ben Younger thought it essential to shoot Boiler Room on location in his native New York, traversing from the manicured lawns of Flatbush and the mean streets of Queens to the lavish mansions of Long Island.

“This is Ben´s world, where he´s comfortable, and it´s where he could best capture the flavor of the film,” explains Jennifer Todd. “The film is not only about the financial world but it´s about people living on the fringes of Manhattan and what the dream of the city means to them. You couldn´t capture that anywhere else.”

Shooting a first-time film in New York could have been a disaster, but Younger turned it into an inspiration. Comments Suzanne Todd: “New York is traditionally a very expensive place to make movies, but we looked at it a different way: making it work by being creative and being inventive. The sense of the city is really there.”

Boiler Room deftly captures New York´s ethnic neighborhood flavor, then delves into the polar opposite world of the boiler rooms. Production designer Anne Stuhler took on the challenge of recreating the electrified essence of the boiler room atmosphere for audiences. “I wanted to capture the idea that these places are totally removed from the real world, that it is a special environment where these guys become different people than they are on the outside,” explains Stuhler.

“The boiler rooms feel very stark, cold, separate from the rest of society,” she continues. “And they are also very temporary, because they have to be ready to shut down at a moment´s notice. Therefore, we had to design a place that is cluttered with phones and papers and computers but that looks like it could be moved in two or three hours.” 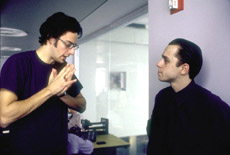 Stuhler visited a few true boiler rooms as well as more sophisticated brokerage operations on Wall Street. “The main thing that struck me about both was the amount of constant information that was going on – phones, faxes, paper everywhere. It was really kind of amazing, the most unusual work set-up I´ve seen,” she notes.

On the heels of her research, Stuhler took an empty space in Garden City and transformed it into a bustling boiler room, where chaos reigns as the money rolls in. In addition to creating a visceral sense of the boiler room environment, Stuhler worked closely with director Ben Younger on the film´s color scheme. “Ben had this idea that the boiler room should always be a cool blue,” she explains, “so when the characters walk into it it´s quite clear they´ve entered a different world. By contrast, Seth is in touch with something outside the boiler room that is much warmer, so we kept his palette really warm.”

Costume designer Julia Caston continued that trend in her work. She, too, embarked on research into this little-known corner of the financial world. In her travels, she discovered that each New York brokerage house has its own set of rules. “In some you can only wear a white shirt, in others you can only wear cream and it still others it is a crime to wear a pink shirt,” she explains. 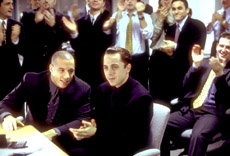 Caston decided to buck Wall Street tradition for the boiler room and let boys be boys, wearing their own street version of what they figured wealthy traders with no income limits would wear. “Ultimately,” admits Caston, “my inspiration came from what young Hollywood agents wear, real slick outfits that depict young men who are trying to be fashionable to the extreme.”

Caston had to dress some 80 suit-clad actors in the boiler room. “We ended up with a hierarchy,” she explains. “Trainees wear button-down shirts and louder, cheaper-looking ties and then you have pin-point collars for managers going all they way up to Tom Everett Scott as Michael Brantley who dresses like a traditional broker.”

Adding further to the look of Boiler Room is Enrique Chediak´s intimate, subtly shaded cinematography, some of it done with hand-held cameras and Steadicam. Ben Younger, who previously worked as a cameraman himself, came to the project with many of his shots planned out, but was excited by the creative contributions of Chediak, whose credits include Morgan J. Freeman´s Hurricane Streets, for which he won the Sundance Film Festival´s Best Cinematography Award. “I gave him my ideas and he brought them to life,” comments Younger. “He is a truly brilliant lighter, one of the best I´ve ever seen. He´s also a master of hand-held.” 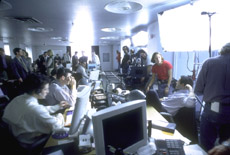 Chediak used Steadicam in the boiler room to add to the palpable frenzy. He also used a hand-held camera to shoot the scenes in which the frazzled Harry is pitched by an ultra-confident Seth. “I think it´s very effective,” notes Ben Younger, “because on the one hand you have these very long, composed shots of Seth and then these shots of Harry where the camera is practically in his face and you can really see the differences and dynamic between the two of them.”

In the end Younger´s wanted to illuminate the dark world of the boiler room, while keeping his set relaxed, fun and rife with a tight rapport that comes across on the screen.

“I think having worked on the set as a grip makes all the difference,” says Younger of his on-set style. “No yelling, no screaming, everybody happy to be there, with a strong sense of solidarity and a focus on doing the work. I guess you could say the guys who worked on this film really understood the term work ethic!”